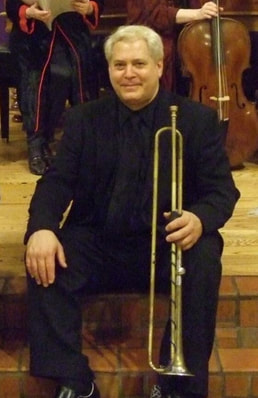 Originally from Muncie, Indiana, Rick Murrell graduated in 1979 from Ball State University with degrees in Music Performance and Music Education. After one semester of graduate studies at the University of Iowa, he was offered a position as principal trumpet in the Veracruz Symphony Orchestra in Veracruz, Mexico.

​Since returning to the U.S., Rick has won positions in many different orchestras and festivals including Quad Cities, IA; Cedar Rapids, IA; Binghamton, NY; Tucson, AZ; Sun Valley, ID; and Bedford Springs, PA. After moving to Pittsburgh in 1990, Rick has played with the Pittsburgh Symphony Orchestra many times. Highlights include: performing Mahler’s 6th Symphony in Carnegie Hall with Loren Maazel; the PSO Pops under Marvin Hamlisch; the Pittsburgh Opera under the direction of Anthony Walker as well as Pittsburgh Ballet Theatre’s Charles Barker.

Rick performs on a copy of an Historic "Nuremberg Brass" 1746 Haas trumpet made by Egger in Switzerland.