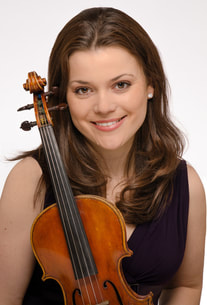 A native of Severna Park, Maryland, Lydia Miller Choorapuzha began playing violin at the early age of five.  Her talent and enthusiasm for the instrument resulted in a scholarship to study at the preparatory division of the Peabody Conservatory in Baltimore, where she learned from world-renowned musicians during her seven years there.  Lydia is, however, a scholar as well as a performer.  She attended BostonUniversity on a merit scholarship where she graduated magna cum laude with a Bachelor of Music degree in the history and literature of music. There she studied with Peter Zazofsky, first violinist of the Muir String Quartet.  In the spring of 2002, Lydia traveled abroad to Berlin, Germany, where she studied German language, history, and literature at the Freie Universitaet and violin at the Hochschule der Kunst, as a student of Rainer Kimstedt.  In the spring of 2006 she completed her master's degree in violin performance at the State University of New York College at Purchase, where she was a scholarship recipient and the teaching assistant for Laurie Smukler, founding member of the Mendelssohn Quartet.  Lydia moved to the Twin Cities in the fall of 2006 to work more closely with her mentor Jorja Fleezanis, former Concertmaster of the Minnesota Orchestra.

Lydia has played with such orchestras as the Pittsburgh Symphony, the Minnesota Orchestra, the Saint Paul Chamber Orchestra, the Minnesota Opera Orchestra, the American Composers Orchestra, the Long Island Philharmonic, the Westchester Philharmonic, the Hawaii Symphony and the World Symphony Orchestra, and has shared the stage with such artists as singing legend Art Garfunkel, Bruce Springsteen, Barry Manilow, and Josh Groban. She is the former Concertmaster of the Mankato Symphony, where she also founded the popular chamber music series, Music on the Hill. Her performance schedule has also taken her to concert halls in Canada, Iceland, Scotland, England, Germany, and South Korea.

Lydia completed additional studies in violin pedagogy with Mimi Zweig of Indiana University and is a certified Suzuki Violin Teacher. In 2015, Lydia became a member of the College of Examiners at the Royal Conservatory of Music in Toronto. As a String Specialist in the College, she travels throughout the US and Canada, adjudicating exams for students of all levels. Her own students have won National Gold Medal awards and have performed in Carnegie Hall after their successful exams. Lydia currently teaches at the PYCO School of Music in Wexford, Pennsylvania.
Back