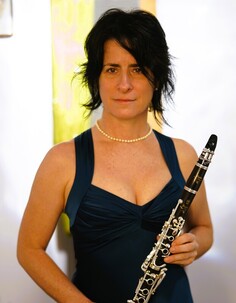 Julieta Ugartemendia has enjoyed a prolific and varied career as a clarinetist, teacher and conductor that includes performances as soloist, chamber musician and orchestra member at important venues in North America, South America and Europe; teaching assignments at schools and universities in a variety of musical subjects; and the formation of several successful musical ensembles. She has performed at Carnegie Hall in New York City, Carnegie Music Hall, Heinz Hall in Pittsburgh, and the most important theaters of Argentina: Teatro Argentino, Teatro Colon, Centro Cultural Kirchner, Teatro Avenida.

Julieta initiated her musical career in Argentina, where she studied conducting and piano at the School of Fine Arts in La Plata and received her Bachelors of Clarinet Performance and Music Education from the Beethoven Conservatory in Buenos Aires. After winning a national scholarship competition in Argentina and relocating to the United States, she completed the Performance Residency Program at Carnegie Mellon University and an Artist Diploma at Duquesne University. Her professors included Thomas Thomson, Michael Rusinek and Ron Samuels from the Pittsburgh Symphony.

After returning to her home country, Julieta performed regularly with the National Symphony of Argentina, Teatro Argentino and Teatro Colon, and since 2017 she has held the Eb clarinet position at the Symphonic Band of Buenos Aires.

Active also in musical education, she was the coordinator and conductor of the Banda de Vientos Juvenil de Buenos Aires since 2015, created and conducted the Wind Ensemble Ayres del Plata, was a clarinet teacher at several youth orchestras from Argentinean’s Youth Orchestral projects, and lecturer through the country as a wind specialist for youth orchestras.
She is the founder and director of the Clarinet Festival ``ECpBA” and “Festival de Clarinete del Buen Ayre” since 2014, and the creator and concertmaster of the “Camerata Argentina de Clarinetes”.

Today, pursuing a new goal in her career, Julieta is completing a Master’s in Wind Ensemble Conducting at Carnegie Mellon University under the instruction of Maestro George Vosburgh.
Back