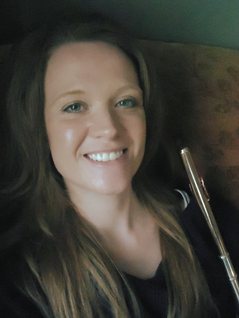 Mrs. Abigail Tuffiash graduated from the Hartt School in West Hartford, Connecticut with a Bachelor of Music Degree in Flute Performance and holds several additional certifications in the Suzuki flute method. Abigail’s skill as a flutist earned her a performance scholarship to the Hartt School of Music under the tutelage of New York City Opera Principal Flutist John Wion. In addition, she was honored with a performance scholarship by the Eubie Blake Scholarship Fund and is a twice named winner of the Duquesne Young Artist Competition.

​As a performer, Abigail is most interested in the flexible opportunities provided by freelance and small ensemble performance. She has performed as a freelance soloist, orchestral and chamber musician throughout the Pennsylvania tri-state area as well as in Connecticut and abroad in Germany, Austria, Switzerland and the Czech Republic. Notably, she performed with the Adaskin String Trio during their residency at the Hartt School of Music in Hartford, CT. She was also selected by the multiple Grammy Award winning Emerson String Quartet as a semi-finalist through performance with the ensemble in competition.